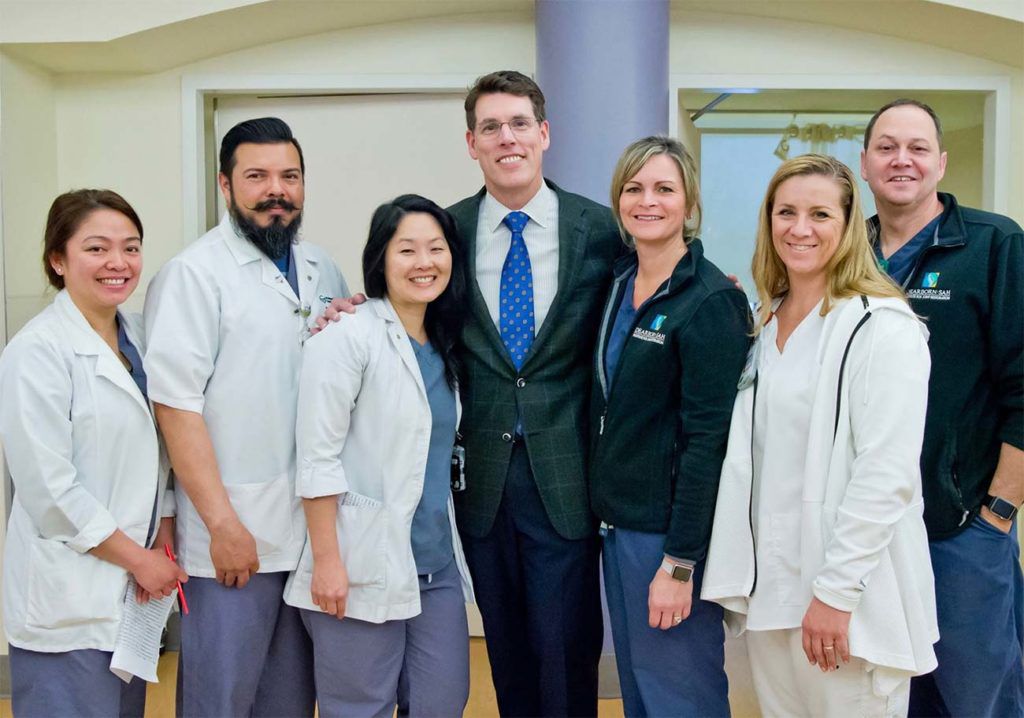 Dearborn & Associates got its start thanks to the rich foundation laid in 1959 by the Fremont Orthopaedic Medical Group (FOMG) which served the orthopaedic needs of the Tri-City community for nearly 50 years. Washington Hospital opened its doors in 1958, and two of FOMG’s senior partners were integrally involved in the Hospital’s growth, including serving as Chiefs of the Medical Staff.

In the mid-1990s, FOMG began its evolution into a group of orthopaedic subspecialists, so after completing his orthopaedic subspecialty training in 1997, Dr. Dearborn joined FOMG with the goal of building a joint replacement program that would combine the best of what he had seen on both coasts.

In 1999, Dr. Dearborn partnered with the Washington Hospital Healthcare System to create the Center for Joint Replacement (CJR), a comprehensive, multifaceted program that now serves patients from all over the world. Over the next five years, the CJR would double its surgical volume annually, as patients from the greater Bay Area and beyond began traveling to have their painful hips and knees restored by Dr. Dearborn and his team. In 2001, Dr. Dearborn joined the Medical Staff at Stanford Medical Center, introducing less invasive surgical techniques there, as well. In 2002, he took over the practice of a Peninsula-based joint replacement specialist and began operating at his alma mater, but declining patient interest in having surgery at a teaching hospital led Dr. Dearborn to concentrate his surgical volume at Washington Hospital in 2004 … while plans for a new, larger CJR building moved forward.

By the end of 2005, the general orthopaedists at FOMG had either retired or gone elsewhere, giving Dr. Dearborn’s joint replacement practice room to grow. He added a second physician assistant and launched his own company: John T. Dearborn MD and Associates. From 2006 until 2011, the Center for Joint Replacement program continued to grow – earning local, state, and national recognition for compassionate, quality care. With the added personnel and margin, Dr. Dearborn’s vision for a comprehensive Institute could now be realized. Joining forces with the CJR staff and Washington Hospital, Dr. Dearborn launched the Institute for Joint Restoration in November 2011 at Washington Hospital. The Institute is housed in the CJR building, built in part by the philanthropic donations of grateful patients. The self-contained Institute brought seamless continuity – from the first office visit, to the brief hospital stay, to the rehabilitation phase and semiannual check-ups – all under the same roof.

We opened our Menlo Park clinical office to respond to patient demand in 2013 and, in 2017, made critical strategic and philosophical changes to simplify and humbly refocus on care excellence, one patient at a time. Stay tuned for our next exciting chapter!

In 2012, we added the Institute for Joint Restoration to our company name. The reason is easy to explain. We are physicians first, and surgeons second. We resist the pressure placed on surgical subspecialists to become mere technicians carrying out a procedure. The technical portion of what we do is certainly critical, but we need to remain fully in touch with the purpose behind the procedure – to relieve pain, return function, and restore freedom. We are committed to taking care of the entire patient, while recognizing that only God has all the answers. Innovative technology, education, counseling, compassion, reverence. The right road to a new lease on life. We are not just about joint replacement. We are in the restoration business.